September long took myself and a buddy on a huge backroad expedition around Adams Lake and Shuswap Lake. I feel I got some stellar images and was able to tick off three bucketlist locations that have been nagging at me. You'll need to click the continue reading button to see the pics in this post and the video at the end.

It started with a rendezvous with a friend at Scotch Creek in a non-descript white van. He suggested hitting up Johnson Lake which I'd never heard of but is 65km north east of Kamloops or a massive potato gun shot east of Barrier. After some horrific premade hamburgers we plummeted into his sloppy ruddered kayak and wiggled around crystal blue waters. Upon our return, truckloads of humans began to arrive at the forest service rec site marking the start of the long weekend so we moved on.

We drove north up Adams Lake to the head of the lake where we turned east and started the stunning drive passed Momich Lakes Provincial Park and a huge black bear. 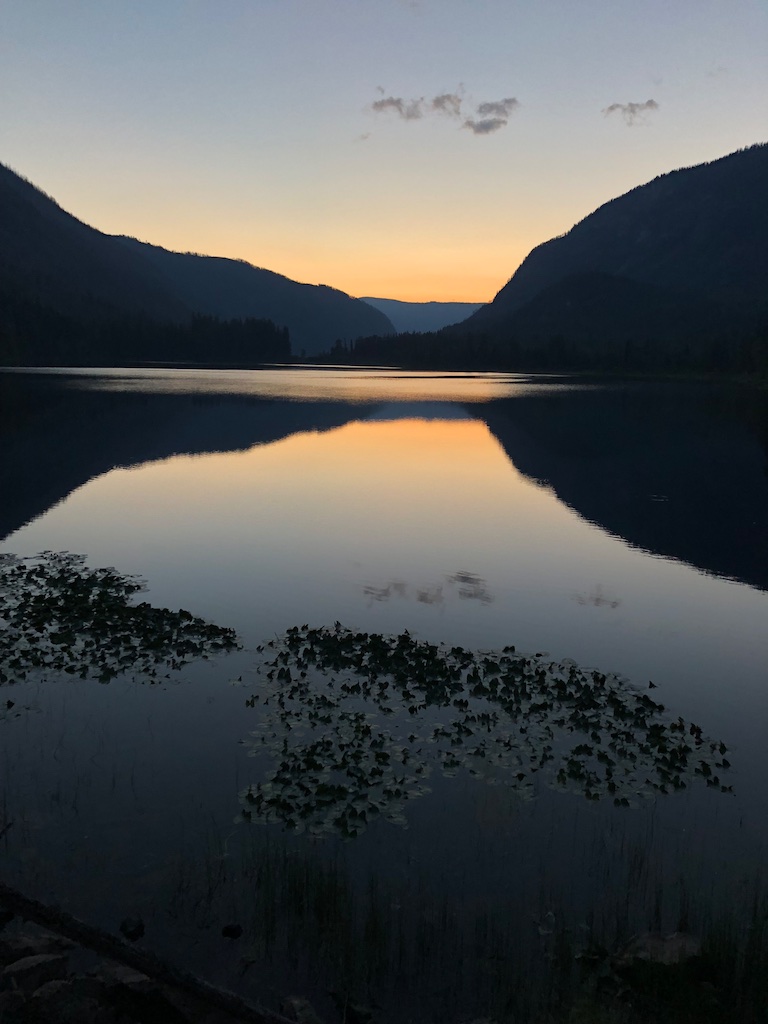 We arrived at a forest service, loon infested, rec site at Humamilt after dark. The video at the end includes some cool loon audio.

After my standard grilled cheese coffee breakfast we bounced along the outflow of Humamilt to Albas Falls Provincial Park. Known for it's cascading waterfalls it's a must see. Easy to access off the 1100 road (aka Squilax-Anglemont rd) a hiking trail jiggles alongside the creek. 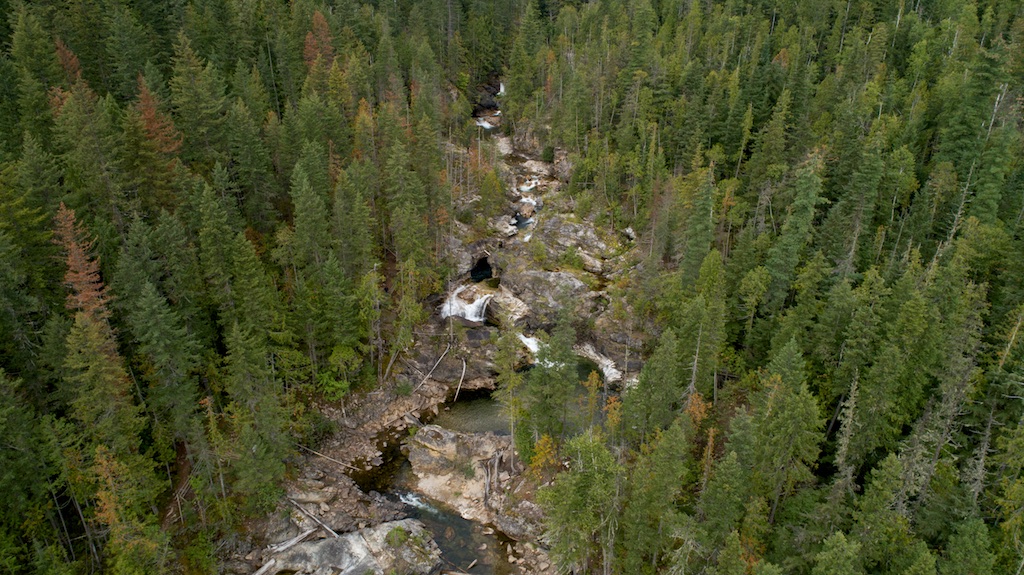 A quick stop at a friends cabin in Seymour Arm to swap kayak for canoe and then we were off to the Seymour River and its provincial park which is said to be the least accessible provincial park in BC. Just outside of Seymour Arm is the spawning salmon show stopper Seymour Falls and its squishy forest trail.

This portion of this adventure all started with a little research on the Seymour Giant which is said to be the largest cedar tree in the area. A framed picture of it's founders in front of the tree was sent to the minister of parks which likely played a role in the creation of this park in 2001.

To canoe the upper Seymour was my second bucketlist item (the first being the exploration of Momich and Humamilt Lakes). We drove 42km to virtually the end of the road without finding a good canoe access point. We did find some very picturesque viewpoints and ancient creeks.

On the return trip my nothing-less-than-stellar navigation led to the discovery of an overgrown road which made for an entertaining drive down to the river. The underbrush belched us out suspiciously close to my desired put-in point for the canoe.

Other then the relentless complaining from my companion the meandering river made for an easy paddle. This leads to the critical question of whether the navigator should sit in the bow or be at the helm and take the intitiative. I chose the latter and unsurprisingly made inpeccable route choices. The high brush on the sides of the river blocked much of the view and the complete lack of wildlife other than one clearly lost swan was rather creepy

Strike three on the bucket list was our exit through the North Fork road back to civilization. The North fork is notoriously unreliable do to bridge wash outs and late season snowpack. It's wedged into several valleys surrounded by grand peaks that are bursting with just out of sight glaciers. Much to my surprise the road was in great shape (by my standards) which I believe to be due to the relentless logging of the towering cedars. Only two wrong turns which I attribute to out of date map books and a critical lack of cell service map loading data over the past three days.

After nearly 500km of dirt roads over three days we ended this trip with an ascent up one last dirt road to the Sicamous Lookout. 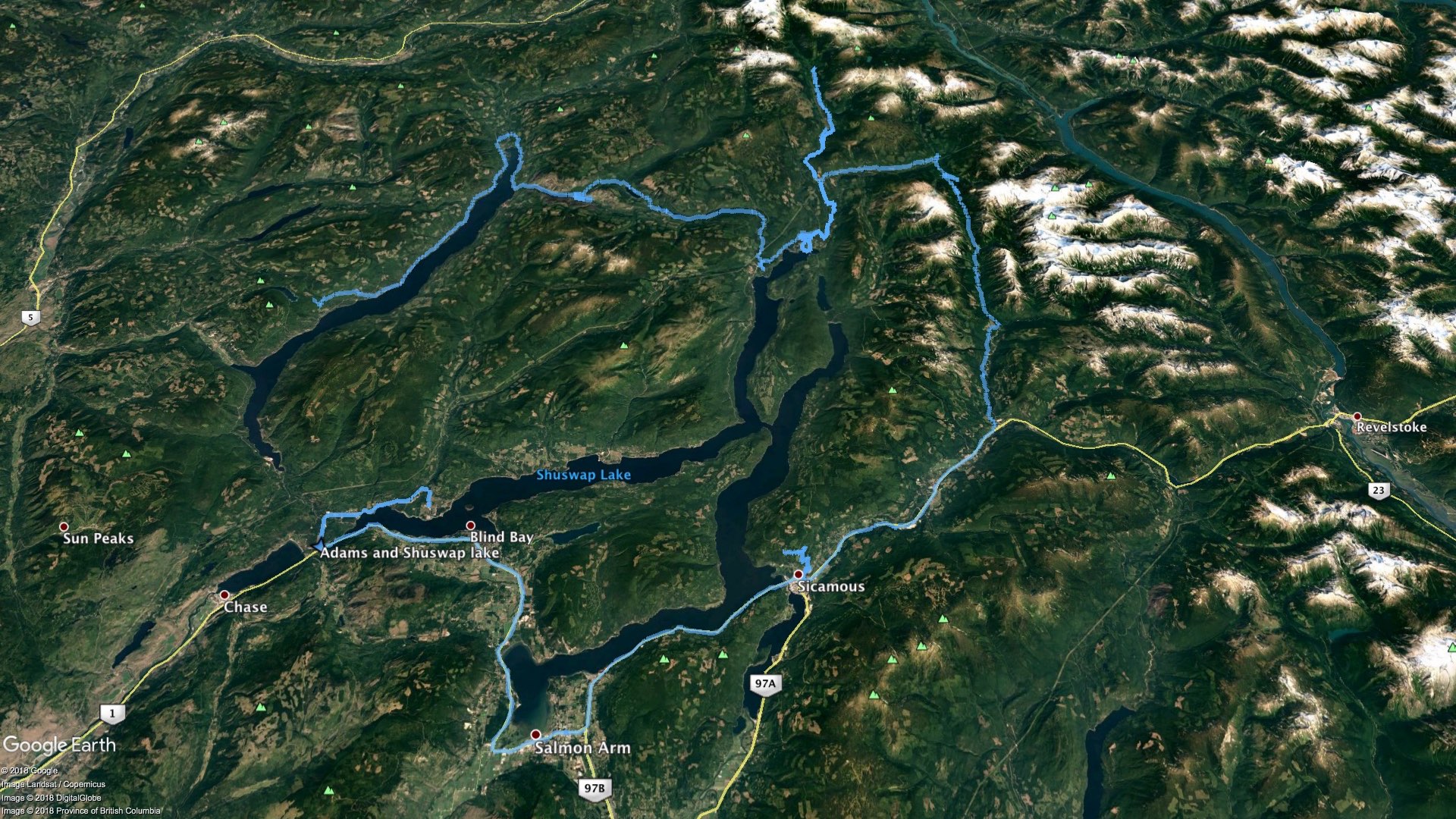 Check out the video below for less than static images. This blog now has a subsribe button in the top right which apprently requires you to have a Joomla.org account which surely isn't worth it but if you feel inclined..... If you enjoyed my 781 word rant please like it, share it, comment on it or just heckle. Happy to offer more details if you feel inclined to visit any of these places.

Way up the creek

Back to the Future - Drought Mountain